The upcoming presidential election has placed a spotlight on the tax proposals laid out by President Trump and former Vice President Biden.

The two candidates have significantly different campaign agendas with respect to future tax policy. President Trump has proposed permanently extending some of the provisions enacted under the Tax Cuts and Jobs Act of 2017 (TCJA), such as 100 percent bonus depreciation and the individual tax rates that are expected to expire after 2025. He has also proposed expanding Opportunity Zones to promote investment in economically distressed areas, and tax incentives for certain industries (mainly pharmaceuticals and robotics) that bring manufacturing back to the US.

Former Vice President Biden has not released a single formal tax plan as part of his presidential campaign, but he has laid out several tax proposals connected to policy initiatives related to climate change, infrastructure, health care, education, and research and development. The discussion below focuses on some of the more significant business tax changes proposed by Biden.

Biden’s tax proposal calls out for an increase to the corporate income tax rate from 21% to 28%. The TCJA enacted in 2017 reduced the top US corporate tax rate from 35% to 21%, but the reduction in the corporate tax rate was partially offset by the elimination of certain corporate deductions and preference items. At this time, Biden’s tax proposal does not indicate whether any of the corporate tax deductions that were limited or modified under the TCJA will be reversed. For insurance companies, such TCJA changes were related to the increase in the tax discount rates for unpaid loss reserves, and the increase of the proration percentage of tax-exempt interest and DRD from 15% to 25%.

According to estimates by the Tax Policy Center (TPC), this proposal would raise $1,300 billion over a decade.

In response to the TCJA enacted in 2017, the Tax Policy Center had estimated the average combined US federal and state rate to be 25.9%, which is lower than that of all other leading economies in the G7 except the United Kingdom. 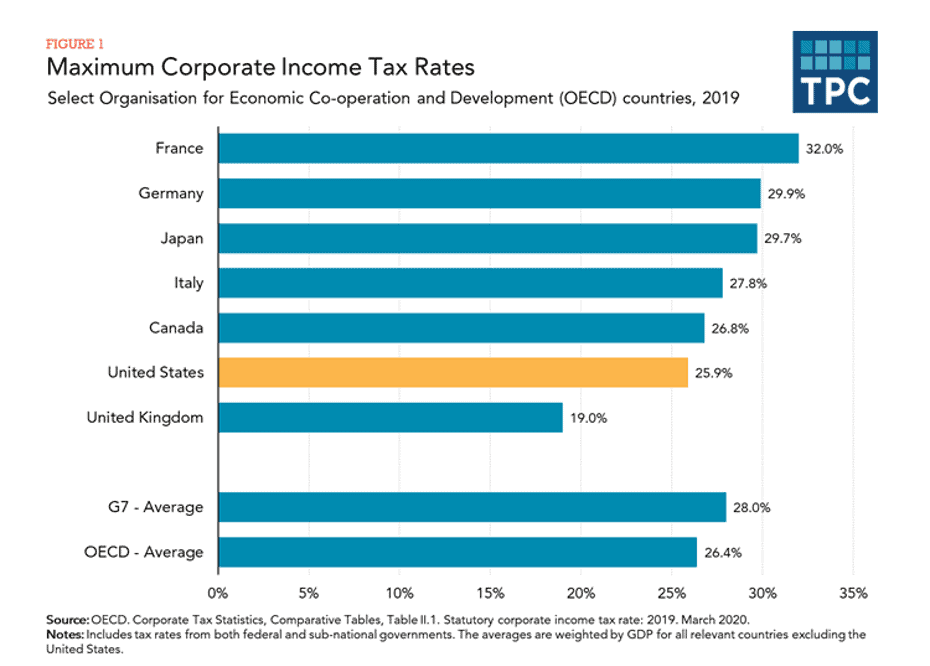 Biden’s tax plan calls for a minimum tax of 15% on the book income of companies with net book income greater than $100 million. This tax is similar to the Alternative Minimum Tax (AMT) repealed in 2017 as part of the TCJA; however, Biden’s proposal calls for the tax to be based on financial-statement income. The intended effect of this new tax is to act as a minimum tax, where corporations will pay the greater of their regular tax or the 15% minimum tax. The Internal Revenue Code (IRC) contains various provisions that create variances between book income and tax income, known as temporary and permanent differences. Companies with tax-favorable permanent differences, which reduce taxable income and do not reverse over time, could be most adversely impacted by this provision. For insurance companies, one such permanent difference is the interest income from tax-exempt bonds.

Additionally, if the tax liability is based on book income, questions would arise as to whether book income should come under more scrutiny by the IRS.

The TPC estimates that this proposal would raise $166 billion over a decade.

Doubling the Tax Rate on GILTI

Biden tax proposals also call for doubling the tax rate on Global Intangible Low-Tax Income (GILTI) from the current rate of 10.5% to 21%. GILTI is the income earned by foreign affiliates (i.e. controlled foreign corporations) of US companies from intangible assets such as patents, trademarks and copyrights. Per estimates from the TPC, this proposal would raise over $300 billion over a decade.

Biden’s tax proposals call for a number of other business and individual proposals to raise revenues, make targeted changes in tax policy that overwhelmingly benefit corporations, and provide specific tax incentives to address climate change and promote US infrastructure investments. Some of the business proposals are as follows:

Changes to tax legislation will depend on both the presidential election and which party controls the House and Senate. In 2017, President Trump was able to achieve the enactment of the Tax Cuts and Jobs Act with a Republican-controlled Congress prior to the 2018 mid-term elections. The status of the pandemic and the US economy will also play a role in determining legislative priorities after the election.

To PTE or Not to PTE — That is the Question