The ACA COOP program is on life support. Officially termed Consumer Operated and Oriented Plans, better known as COOPs, these member-run health insurance entities were initially instituted under the ACA to offer “competitive alternatives” to the traditional insurance company offerings of products.  At their inception in 2014 there were a total of 23 COOPs established throughout the country, and each was originally funded through $2.4 billion in federal seed loans (or solvency grants).  The initial concept sounded judicious, however the devil is in the details.

As they made their debut, the COOPs quickly became hamstrung by inadequate pricing assumptions whereby unhealthy plan entrants far outweighed the healthy ones. Entry level policy pricing was structured under highly idealistic assumptions.  Further, the COOPs were planned and arranged under the hypothesis that in the event certain COOPs experienced poor claim results, the remaining ACA insurance providers, including sister COOPs, would be required to assist in balancing those claim losses through federal assessments into a fund that would redistribute the monies to those who had poorer claim experience.  The formal definition for this approach is called the “risk adjustment mandate”, also called the “risk corridor”.  It functions under the Robin Hood concept – taking from the more fortunate and giving to the less fortunate.  The problem?  All the COOPs are losing money, with some losing less than others.  So, to charge one losing COOP to give betterment to another losing COOP has become quite problematic.  With that background, what’s happening now? 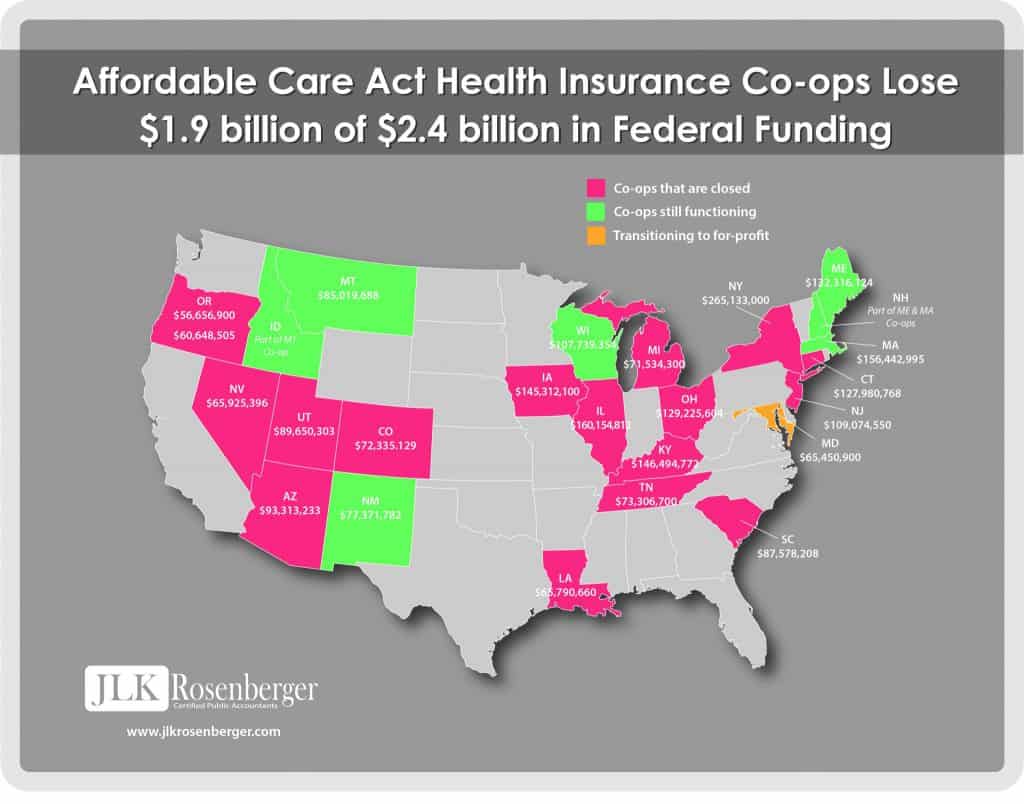 The aforementioned pricing shortage has come to roost. Five COOPs out of the original 23 will remain following year-end 2016…eighteen have been retired by state regulators for solvency issues.  Of those remaining, all but one are under regulatory corrective action plans. Self-preservation has become the standard.  The Maryland, Oregon and Illinois COOPs have sued the federal government over the risk corridor assessments to circumvent their own demise.  Will ACA survive without the COOPs?  Quite likely the federal exchange will take on their function.  However, the original seed loans will go as unpaid and in default.  The overall ACA concept will require reassessment to make a universal health program sustainable.  Though this may not directly apply to your operational and financial reporting structure, the fall-out of changes to the universal healthcare system will affect the entire health care system, and at some point will trickle down to the pricing of all individual and group benefit plans.  Keep an eye on it…it is to your benefit (pun intended)!

The Latest on Business Interruption – At Home & Abroad

Join us at IASA in Arizona