The Great Fire of London in 1666 caused a revolution in insurance and firefighting, changing the way these vital social functions operated. As the years progressed, bucket brigades and countermeasures focusing on containment were replaced by organized brigades funded by insurance companies. As a mark of protection, buildings had metallic plaques with their insured’s logo, known as fire marks, attached to them. Fire departments from that specific company would work their hardest to protect structures bearing their fire mark, and the insurance company would reimburse any damage. These marks would also serve as a deterrent to arsonists, as any property damage would be paid for in full, eliminating any financial incentive to target the structure.

Two of the major players in the ruse of fire marks and property and casualty insurance in the UK were the Royal Exchange Assurance of London and the Sun Fire Office. Royal Exchange Assurance of London was granted a Royal Charter in 1720, at a time when the British Isles was a rising star in the race for European colonization of the world. A year later, they began to write property & casualty insurance, making the company Britain’s first composite insurer. (The company would eventually merge into Guardian Assurance Company in 1968.) 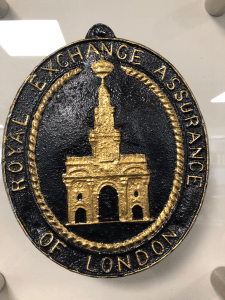 While Royal Exchange Assurance of London is credited as the first composite insurer in the world, Sun Fire Office is credited for being the first insurance company to use fire marks. Charles Povey founded the Exchange House Fire Office in 1708 and it was taken over by the Company of London Insurers in 1710, officially becoming the Sun Fire Office. (They would eventually merge into Alliance Insurance Company in 1959.) 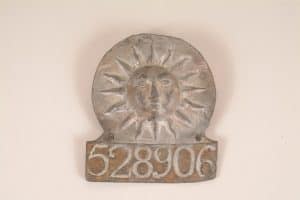 The beginning of property & casualty insurance in the United States is widely credited to one of the most brilliant minds of the 13 Colonies. Benjamin Franklin founded the Philadelphia Contributionship in 1752, which is considered the first P&C company in the English new world, predating the birth of the US itself. The company formed as a mutual company modeled after the Amicable Contributionship of London, and it shows in the company’s fire mark below. The company is credited as one of the first to set up loss reserves and perform property inspections on potential policyholders and is still in existence today. 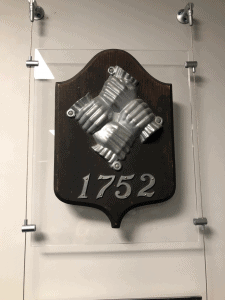 Unlike the UK insurance companies, the Philadelphia Contributionship and other later American insurance companies would not fund their own fire brigades, as the area they covered was too vast, necessitating a single company to fund multiple brigades. This resulted in American fire brigades to remain as volunteer organizations that were paid by insurance companies for saving properties. Unfortunately, this would lead to some uniquely American problems, as brigades would fight each other over who would get paid, and would even hire people specifically to sabotage or beat off rival brigades.

Check out a recent post we published on the first insurance company logos.

12 Days of SSAP: Insurers Need to be Creative in a Hard Market for Reinsurance

Economic and Market Conditions for insurers at S.S.A.P. Chat Live