Fire development happened far differently in the United States than in the UK (explored in this article). Unlike in the UK, insurance companies were forced to rely on volunteers rather than funding their own brigades. A larger geographic area existed in the US that these companies underwrote in, and because many towns had volunteer brigades before property & casualty insurance came to the states, these brigades were well-established and difficult to unsaddle. In the States, fire brigades were more than a public service, they were social clubs and places for men to hang out, and in larger cities, these brigades wielded significant political power. But while the US might have been behind the UK in terms of organization and creating government-funded systems, there is a reason the US was known as a land of innovation back in the 19th century. Two of the most important firefighting technologies in the modern world were invented in the United States under vastly differing circumstances and cities.

The world’s first fire alarm was developed by a Bostonian physician named William F. Channing in 1852. This system was based on another American invention, the telegraph, and began operations the same year. The system was built by the city under Channing’s supervision and placed into effect on April 28, 1852. On May 1, the first alarm sounded. Overnight, fire departments gained the ability to receive alerts of new fires from anywhere in the city and instantly respond with, what was at the time, an extreme level of accuracy, greatly cutting down the scale of what could become massive blazes. 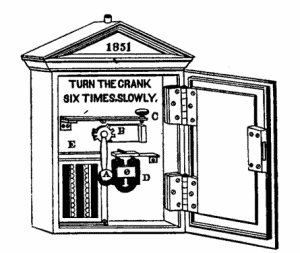 A diagram of the original Fire Call Box from computerimages.com

The second key invention was the steam engine, invented in Cincinnati, Ohio, in 1852 by Alexander Latta. While other steam engines were previously invented in other nations, they had various design flaws preventing the wide-spread adaptation of them, such as poor mobility or volatility of the steam engine. The engine developed by Latta and his associates helped pave the way for smaller, more efficient professional brigades. This device was far more powerful than the older hand-pump engines and favored a smaller but better-trained crew to operate the specialized machinery. The new engine proved to be so popular that the citizens of Cincinnati pooled together enough cash to purchase a second machine for the city, then named “Citizen’s Gift.” 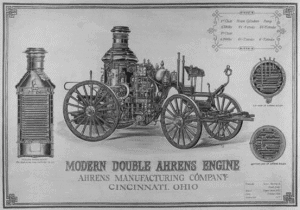 By the mid-1850s, fire brigades were becoming less desirable for American cities. They often spent more time fighting each other rather than actual fires due to the “bounty” system used by many insurance companies, and some cities were wary of the political power these brigades wielded. In addition, volunteer brigades were slow to adapt to changes in technology. These brigades used their political influence to stall out the creation of many metropolitan forces until the late 1860s. Interestingly, one of the factors behind the fall of volunteer brigades was the American Civil War. As many of these brigades consisted of lower-class men, their manpower was sent out to fight, never to return home, thus sapping the brigades of much of their manpower. This helped in the establishment of smaller but more professional municipal fire brigades, paid for by tax dollars, and equipped with the latest in technology.