In 1666, the Great Fire of London ravaged the city, rendering over 75% of its inhabitants homeless over five days. Prior to this tragedy, measures taken to prevent fires were largely community-driven, with a decent amount of the general population having access to rudimental fire countermeasures that focused primarily on containment of a blaze. These countermeasures were grossly ineffective against the firestorm that consumed the old city, where temperatures reached as high as 2,280 degrees Fahrenheit, and more standardized measures were deployed too late to save much of medieval London. In the aftermath of the blaze, efforts were made to ensure the city would be prepared to prevent future tragedies from occurring. This is when insurance companies stepped up and began writing some of the world’s first property insurance policies.

Fire marks were metal plaques that insurance companies gave to policyholders to fix on the outside of their properties. Each mark was unique to the insurance company issuing it and indicated to the fire brigades which specific property was under their protection in the case of a fire. One of the first marks was issued by the Fire Office, and featured a phoenix on its mark, symbolizing rising from the ashes. A similar firemark is shown below. 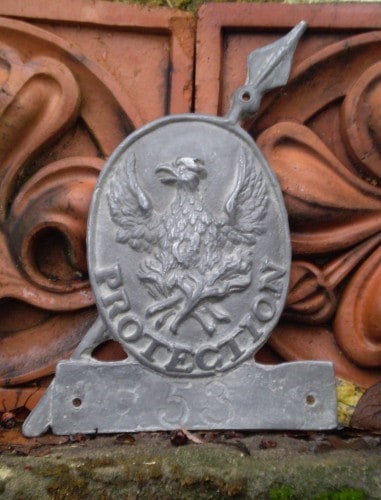