According to Section 9010 of the Affordable Care Act, entities that issue health insurance must pay an annual fee one year (fee year) based on the amount of premium written in the prior year (data year).   For a more extensive explanation of this fee see the post on SSAP 106.

According to SSAP 106: Affordable Care Act Assessment the assessment is estimated and, on a monthly basis, set aside as special surplus during the data year. There is no asset, liability, or income statement effect that year. In the fee year, the special surplus entries are reversed, and the full liability is recorded and expensed on January 1 as part of Taxes, Licenses and Fees.

According to FASB 720-50: Fees Paid to the Federal Government by Pharmaceutical Manufacturers and Health Insurers nothing is recorded in the data year. In the fee year, the amount is estimated and recorded as a liability and a deferred cost. The deferred cost asset is amortized as an operating expense using straight-line method, unless another method is better. The assessment may not be considered a policy acquisition cost and may not be amortized as part of deferred policy acquisition costs.

For a visual illustration of when each accounting framework recognizes the assessment, see the timeline below: 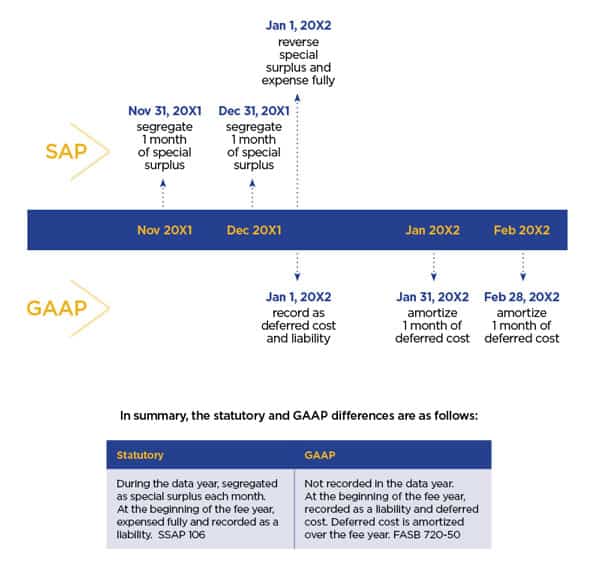