In June 2014, the NAIC issued SSAP No. 106: Affordable Care Act Assessments to address proper accounting and disclosures for the assessment under Section 9010 of the Affordable Care Act (ACA).  This SSAP applies only to those entities subject to the Section 9010 assessment. This new standard adopts ASU 2011-06: Other Expenses – Fees Paid to the Federal Government by Health Insurance with modifications, and it incorporates the revisions previously addressed in SSAP No. 35R: Guaranty Fund and Other Assessments.

Explanation of the fee

Section 9010 of the ACA imposes a fee on entities that issue health insurance; however, the ACA includes significant exclusions regarding which entities are required to pay this fee.  To calculate the fee, an entity multiplies the applicable amount by the ratio below:

The applicable amount is defined as the aggregate fee amount each year for all covered entities under section 9010 and is as follows:

The net written premium figures from one year are used to calculate the fee that becomes payable to the U.S. Treasury the following year. For example, net written premiums for calendar year 20X1 (data year) are used to calculate the fee to be paid in calendar year 20X2 (fee year). An entity’s assessment becomes payable once the reporting entity provides health insurance in the fee year.

This fee is not tax deductible.

In the data year, the estimated fee due in the subsequent calendar year must be reclassified from unassigned surplus to special surplus. The accrual should be made on a monthly basis throughout the data year. Therefore, this fee does not reduce total surplus until the year in which it is due. On January 1 of the fee year, the prior year segregated surplus is reversed, and the fee is estimated and recorded as a liability and expensed as part of Taxes, Licenses and Fees.

Assuming the entity revised its estimated fee obligation based on data available from $120 to $130 the journal entries would be: 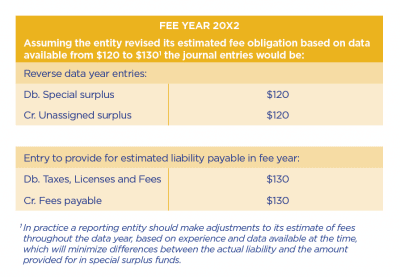 All statements ending on or after December 31, 2013 must disclose the assessment payable in the subsequent year like the Type II subsequent event disclosures described in SSAP No. 9: Subsequent Events. Required disclosures include:

For all statements ending on or after December 31, 2014, additional required disclosures are as follows:

The new reporting requirements implemented in SSAP No. 106 are complex and represent a significant change to annual reporting procedures for companies issuing health insurance.

To understand how these presentation and disclosure requirements differ from GAAP, watch for our next post.