2023 is shaping up to be an interesting year for the insurance industry. In many ways, it will be challenging. One of the biggest challenges faced by insurers is in the reinsurance market. Insurance for the insurance industry is vital to spreading of risk, preservation of capital, and provision of capacity to grow. The problem is that there is simply less reinsurance available as we head into 2023 when compared to previous years.

Why is there less reinsurance?

Diagnosing the problem is easier than identifying the root cause. That is because the causes are numerous and include: inflation, rising interest rates, market values of securities, exchange rates, regulation, social inflation, and experience. All these factors are reducing the appetite for risk-taking and shrinking the supply of available capital in the risk transfer market. Simultaneously those same factors are driving up demand from insurers resulting in today’s hard market.

Market values of securities have been declining with rising interest rates, driving down the value of debt securities with less attractive yields than current rates. At the same time, equity securities are less attractive relative to debt, and the specter of recession and lower corporate earnings deflates corporate equity values. This decline has a direct and negative impact on the balance sheet and capital of insurers and reinsurers alike, driving up the need for reinsurance from insurers and reducing reinsurers’ capital.

Exchange rates, particularly in the form of a strong dollar against the Euro and other currencies, adversely affect supply. As US dollar premiums are translated into higher Euro values for the likes of the three largest reinsurers, Munich Re, Swiss Re, and Hannover Re, it will materialize as higher demand relative to reinsurer capacity.

Regulation has, in some instances, had positive effects on insurance, but it often has a negative impact. Changing regulation, particularly where statutory limits for certain perils are in place, will increase uncertainty around anticipated frequency and severity, making it difficult for insurers to determine adequate pricing. Take California’s modernization of MICRA (Medical Injury Compensation Reform Act of 1975), which will significantly increase losses to medical malpractice insurers. Regulation in the form of prior rate approval also increases uncertainty around rate adequacy when insurers are not able to pivot based on changing frequency and severity. In many cases, regulation drives larger insurers from the market, such as is occurring in Florida and California. In some cases, the void is filled by surplus lines writers or smaller to middle market insurers. In other cases, the insurer of last resort, such as Citizens Property Insurance in Florida, is left to cover the gap.

Social inflation is most often seen in verdicts from our court system. These cases determine there is more coverage afforded an insured than was originally anticipated under the policy. The insurance industry appears to have been mostly successful in cases related to business interruption stemming from COVID-19 lockdowns, but cases remain. In other areas, the insurance industry has seen increased awards for damage and non-economic damages.

Experience has not been good for the reinsurance industry. In 2022 Hurricane Ian barreled across Florida, where the cost is still undetermined, but estimates range from $42 billion to $258 billion. Ian all but guaranteed that the reinsurance industry will have experienced its third consecutive year of losses. In large part, those losses are driven by the cost of wildfires, winter storms, severe convective storms, and floods, not just hurricanes and earthquakes.

In summary, all seven factors identified have the effect of driving down capacity or increasing demand.  In many cases, these factors simultaneously affect supply and demand. The result is increasing scarcity and a higher cost for reinsurance. 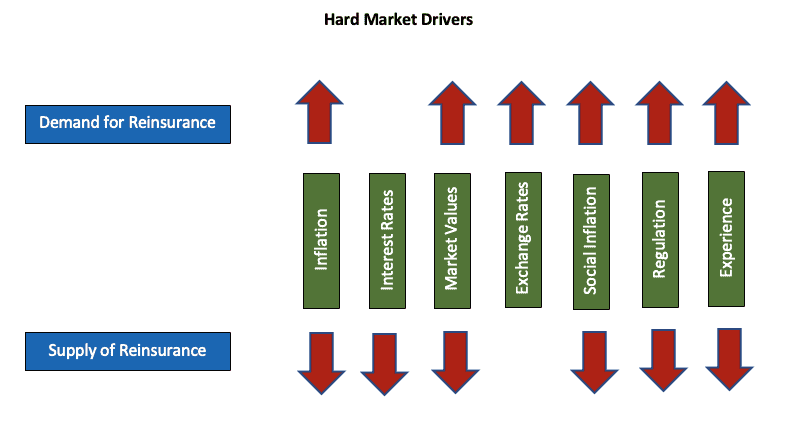 The property market is likely to be the most impacted by rising reinsurance rates but expects reinsurance costs to rise across the board as reinsurers will be more selective than ever. Insurers will need to be creative, particularly if they do not possess the capital base to allow them to retain more risk. Insurers will want to evaluate their growth strategies, perhaps slowing down expansion and/or being more selective and de-risking their portfolios.

12 Days of SSAP: Insurers Need to be Creative in a Hard Market for Reinsurance

Economic and Market Conditions for insurers at S.S.A.P. Chat Live